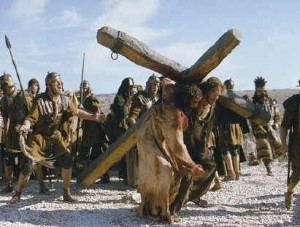 We call it “Good Friday”. But like so many things in the Kingdom of God, it was good for us, but bad for Him. What we call “Good” was terrible for our Lord Jesus. As you go about your day today, consider these facts: Early on that Friday morning, after no sleep the night before, Jesus was taken to Pilate’s prison. He was beaten by professional torturers who knew their craft all too well. He was then presented to the crowd who chose the notorious prisoner over the very Son of God. Throughout the day Jesus was silent and, ironically, directing every move that took place. He was taken into the courtyard (called the Praetorium) and the entire company of soldiers surrounded Him. They stripped Him, put a crown of thorns on His head, a staff in His hand, and knelt down before Him in mockery. They spat on Him and punched Him many times, as hard as they could. Later that morning, exhausted and famished, He carried His own cross to Golgotha and was nailed to it at about noon. Darkness came over the earth from noon until 3:00 p.m. Not much later that afternoon, Jesus cried out “It is finished!” and He died. Around 5:00 or 6:00 p.m. the women came to prepare His body for burial and they placed it in the tomb. The massive stone was rolled into place as the sun went down on the saddest day in history. And the angels were silent as all creation watched to see what would happen next.

As you go throughout the day today, be in a constant state of remembering what happened to our Lord Jesus. Think about each event as though it was all happening today. Consider the horrific emotional strain of knowing you are about to be killed, and greater still, the anticipation of the very wrath of God upon sin that would come upon you. And remember, He did all of this for one reason: you. Remember also that it’s Friday, the saddest day in history, but… Sunday’s coming…

Pray: Lord, today I will walk with You through Your sufferings. I will meditate on every phase of Your sacrifice for me. My heart breaks over my sin that put You on the cross.

RT @LesslieNewbigin: We are by nature idolaters, constructing images of truth shaped by our own desires.

Join me, as I pray, process, and consider my role in the mess we’ve made of our city and our nation. I’m asking God… https://t.co/fN1SFYkJKA

How we are responding to this cultural moment and the need for justice, equity, and reconciliation ⁦@parkcitiesbap⁩… https://t.co/hhC0jKAqdU

Believers from across our city gathered to pray for justice, equality, change, and for non-violent solutions, durin… https://t.co/qJpDxAEfgP