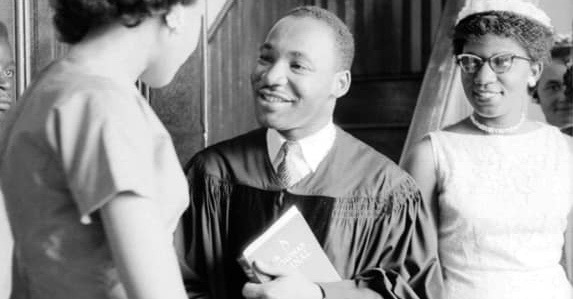 In December of 1955, Rosa Parks refused to give up her seat for a white person on the bus she took on her ride home from work. And she was arrested. Parks was charged with violating Montgomery’s segregated bus seating law. Soon afterwards, the Montgomery bus boycott was organized and the “Montgomery Improvement Association” (MIA) came into being. Reverend Martin Luther King, Jr., who was then a preacher at the Dexter Avenue Baptist Church in Montgomery, was asked to become the president of the MIA- because he had been the voice behind the boycott from the start. King accepted the presidency and soon became the focus of white racists opposed to equal rights for Afro-Americans and the civil rights movement in general. On Monday night, January 30, 1956, King was speaking at a meeting that had been organized to support the bus boycott- at Montgomery’s First Baptist Church- a full house, pews, stairways, walls, every seat in the house was taken.

The bus boycott was a couple of months long now. He was tired. The long walks, the threat of violence always against him. When they decided on the boycott, he delivered a speech that was amazing. And for the next 6 weeks he would preach and the people would listen. On this night, 2,000 people had piled into the church. They had gathered because they all knew that they were challenging segregation and white supremacy. This was a moment for them to come together. Consider too, that Martin Luther King was 26 years old.

While King was speaking, his wife and firstborn daughter, Yoki (Yolanda Denise), were home. Suddenly, a bomb, planted on the front porch of King’s residence, went off and blew out the windows of the house and causing significant damage to the porch of the family home. Pastor Ralph Abernathy kept receiving notes while sitting in the church and finally Mr. King asked what was going on and the pastor told him: “Your house has been bombed.” Not knowing if his family was okay, dead or alive, Dr. King stepped up with his normal public calm and asked the crowd to go home in peace, and he left out of side door and went home. But the people did not go home in peace (and who could blame them?). Instead, when King arrived he found a crowd of black brothers and sisters with sticks, knives, and guns in his yard – and a barricade of white policemen out front. This did not improve the crowd’s mood. A week earlier, Clyde Sellers, the Police Commissioner, publicly joined the White Citizen’s Council, which effectively made the Montgomery Police Department an arm of the Clan.

As he walked through the destruction of the front of his house, inside he found reporters, the police chief (Sellers), and the fire chief in his house. He found Coretta and his Yoki, shaken but unhurt. Members of his church were already there, surrounding Mrs. King and her baby. And outside no one was leaving, until they knew King’s family was okay. Clyde Sellers began to panic. He was scared as the scene outside was getting worse. Clyde Sellers asked King, “Will you speak on my behalf to the crowd?” Reverend King said, “Yes.” He stepped out on the ruins of his small white house and here’s what he said:

I believe this incredible moment revealed, not only the character of this young 26-year-old pastor, but the power behind his world-changing work that was to come. He could have incited a riot. He could have justified violence against those who sought to kill his family. He could have refused to help the man who was joining forces to stop all that King stood against. He could have settled for a short-term win, while losing the long-term victory. He could have sought to appear “strong and courageous” by verbally taking down the chief and the authorities (and he clearly had the verbal skills to do), instead pointing to the One who was truly in authority. He could have sent the people home to fight another day, instead of teaching them how the battle would be won in the days ahead. His response serves as a model for us today.

Consider what Dr. King teaches us from this single event:

Dr. King taught us that true change is found by following the paradoxical ways of Jesus. May we all continue to fight for Dr. King’s Dream to become a reality, as we leverage our influence to come against social injustice and racial inequality.

@dwhardage There you go again. Way to go! 💯

@cwaggonerfox4 Love you guys so much. Let’s get onto that book! 💯

What the Church needs now is a radical return to the teaching and preaching of both justification and sanctificatio… https://t.co/Y2RaXtkoIv

I’ve watched Benjamin grow up all his life. He’s been a source of inspiration, aspiration, and joy for me since day… https://t.co/N0WTH6LNgs